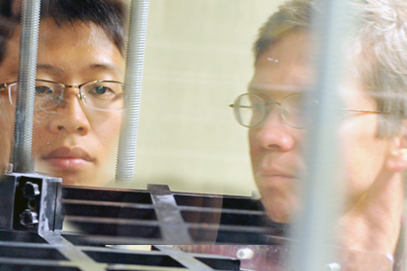 Amid rising student interest, Wesleyan has announced a new interdisciplinary minor in Integrated Design, Engineering, and Applied Sciences (IDEAS), beginning in 2017-18. It will be hosted within the College of Integrative Sciences (CIS). The IDEAS minor will introduce foundational skills in engineering and design, and bring together existing arts, design, and applied science courses to create a more formal structure to guide students interested in these fields. According to Professor of Physics Francis Starr, a co-proposer of the minor and director of the CIS, “The new minor plays into Wesleyan’s unique capabilities and dovetails with Wesleyan’s commitment to prepare students…
CONTINUE READING
Ellen Nerenberg, the Hollis Professor of Romance Languages and Literatures and department chair, discusses her passion for Italian studies and her new book, Murder Made In Italy: Homicide, Media, and Contemporary Italian Culture in this video: [youtube width="640" height="420"]http://www.youtube.com/watch?v=6k7wW2JXajU[/youtube]
CONTINUE READING
Professor Ellen Nerenberg, chairperson of the Romance Languages and Literatures Department, recently published a new book, Body of State: The Moro Affair, A Nation Divided. It offers a translation of Marco Baliani's acclaimed dramatic monologue, Corpo di Stato, concerning the 1978 kidnapping and assassination of Italian Prime Minister Aldo Moro by the terrorist Red Brigades. Nerenberg authored the translation along with Nicoletta Marini-Maio and Thomas Simpson. She also co-wrote a critical introduction to the book, with Marini-Maio. Corpo di Stato was commissioned by Italian state television in 1998 to commemorate the 20th anniversary of the "Moro Affair." Through over 100 performances of Baliani's monologue since…
CONTINUE READING
Wesleyan has announced the following promotions of faculty, effective July 1, 2010: Promotion with Tenure During the academic year, the Wesleyan Board of Trustees maintains an ongoing process of tenure case consideration. During its most recent review, the Board awarded tenure to one faculty member effective July 1, 2010. Michael Singer, associate professor of biology, was appointed assistant professor at Wesleyan in 2004. Previously he was postdoctoral fellow at the University of Arizona’s Center for Insect Science, in Tucson. Singer’s research examines the evolutionary ecology of tri-trophic interactions between plants, herbivores and carnivores. In considering (more…)
CONTINUE READING
(more…)
CONTINUE READING