1. CNN: “How Coronavirus Has Reshaped Democratic Plans for 2020”

This article on how Democrats are politicizing the government’s response to the coronavirus crisis features research by the Wesleyan Media Project, which found that this past month has seen a huge drop in campaign advertising overall. “The messaging and the attacks that we’ve seen on [coronavirus] do feel louder … in part because there are fewer messages overall,” said Erika Franklin Fowler, associate professor of government, co-director of the Wesleyan Media Project. She notes that health care was emerging as a top issue in 2020 advertising for Democrats even before the pandemic began, so “it’s not surprising that Democrats appear poised to focus on the pandemic and the Trump administration’s response to it as part of their larger strategy to hit Trump and Republicans on health care.”

2. Vox: “5 Lessons from World War II for the Coronavirus Response”

Assistant Professor of Economics Gillian Brunet writes about five “valuable lessons” from World War II for the current moment. Some strategies include centralizing and coordinating the government’s purchases of medical equipment, including personal protective gear, and repurposing existing institutions and taking advantage of existing expertise. Brunet writes, “The evidence from World War II strongly backs up the paradigm that policy should focus on relief now and stimulus later.”

3. AP: “Analysis: Virus Shows Benefit of Learning from Other Nations”

William Johnston, the John E. Andrus Professor of History, academic secretary, comments in this article on learning from the experiences of other countries. “In the past, countries have looked at the discovery of cures and vaccinations as matters of national competition,” he says, noting, “The competition between the French and the Germans during the late 19th century was especially marked, over any number of diseases.” While this competition can be harmful at times, it has also led to better outcomes by spurring discoveries, such as when France and the United States both raced to discover HIV. Johnston also notes that national competition versus cooperation in science waxes and wanes, but right now he believes the world is in one of its more nationalistic periods. He also sees another force at play in the Americans’ response to the COVID-19 crisis: “My take of our failure goes to this bent of questioning science and going to the creation of doubt, starting with lung cancer, acid rain, ozone hole, and so on,” he says. “Whenever there is an economic hit, it has led to the creation of doubt.”

Associate Professor of Sociology Kerwin Kaye is interviewed about drug courts in connection with his new book, Enforcing Freedom: Drug Courts, Therapeutic Communities, and the Intimacies of the State. He discusses how drug courts perpetuate racial stereotypes, why they often act as an extension of the punitive approach taken by the “war on drugs,” and how they might be reshaped as a voluntary system to provide better outcomes.

5. PBS Newshour: “What an Interrupted School Year Means for These College Students”

Melisa Olgun ’20 is interviewed in this story on how the coronavirus crisis is interrupting the lives of college students. The first in her family to go to college, Olgun speaks about the additional challenges facing low-income and first-generation students during this period of social distancing and remote learning. “When you go to an elite liberal arts university with lots of financial aid, everyone assumes that first-generation and low-income students have the same access to resources, have everything that all the privileged students have. The second COVID-19 hit campus, you saw those breaks. You saw those gaps in access.”

1. Washington Post: “Former FDA Chief Grabs Spotlight with Coronavirus Plans to ‘Turn the Lights Back On’”

Former Food and Drug Administration Commissioner Scott Gottlieb ’94 and his team have outlined two plans to “navigate the treacherous path back to some semblance of normalcy.” His plans emphasize the “Three ‘T’s”: testing, contact tracing, and treatment. Gottlieb briefed members of Congress on his findings and has been serving as an informal advisor to the White House’s coronavirus task force. The article notes, “Gottlieb is widely regarded as among the most prescient about the disaster, and his thoughts about how to deal with it are helping define, even if in delayed fashion, the federal, state and local responses.”

Rep. Max Rose ’08 of New York deployed with the National Guard to set up field hospitals in Staten Island and other parts of New York. Rose, a combat veteran and captain in the Army National Guard, is the first member of Congress to deploy with the National Guard. In the interview, he said, “I do see this as an opportunity to serve New York City and my community, and to serve on the ground from an operational perspective. This is about working day-to-day to make sure we can withstand and weather this surge.”

3. Boston Globe: “This Is Uncharted Territory for College Coaches Searching for Talent”

Boston University athletic director Drew Marrochello ’91 was interviewed about how universities are recruiting student-athletes during the coronavirus pandemic through virtual tools. Because of the pandemic, coaches are not able to see players display their talents at camps, clinics, and tournaments, so they have to get creative. He said, “We’re still connecting virtually, certainly the recruiting dead period being extended has impacted coaches and their ability to be on the road and to see the next crop of talent, but they’re still connecting with their teams, there’s still a lot of things to do.”

4. AG Daily: “Great Women Who Are Leading Agriculture Groups in the U.S.”

Co-Executive Director of the National Young Farmers Coalition Sophie Ackoff ’11 made a list of the women who are pioneering the future of the agricultural industry. Ackoff has “mobilized young farmers and their supporters for policy change since 2012 and helped lead the coalition to win historic investments for young farmers in the 2018 Farm Bill.” She has also been named one of 25 Leaders in Food and Agriculture to Watch in 2019 and is among Jewish Week’s “36 under 36.”

Patrons of Wesleyan R.J. Julia Bookstore can look forward to sipping on coffee while they shop—the bookstore recently partnered with Hartford-based Story and Soil Coffee Co., which will open its second location inside Wesleyan R.J. Julia on May 1. fal.cn/3eQE8 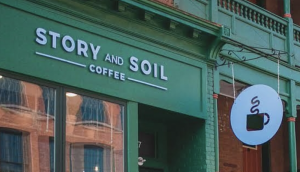