Tag Archive for College of Letters Kari Weil, University Professor of Letters, delivered a keynote address on “Animal Studies: The Ends of Empathy and Beginnings of Reading” at a “Why do Animal Studies?” conference April 3-4 at the University of Chicago.

During the conference, scholars discussed “What is it that draws a multiplicity of voices into this conversation, and how can they productively engage with one another? Why has this field of inquiry gained such traction in recent decades? How is Animal Studies taking shape as a field that overlaps multiple discourses and disciplines, and what opportunities or difficulties arise as a result? How do different methodologies clarify or substantiate one another, fill knowledge gaps, and illuminate unknown aspects of individual areas of interest?”

Weil has published widely on literary representations of gender, feminist theory, and, more recently, on theories and representations of animal otherness. She recently co-edited a special issue of Hypatia titled, Animal Others (2012) and she is the author of  Thinking Animals: Why Animal Studies Now (2012) and Androgyny and the Denial of Difference (1992). Her current project is tentatively titled,  ‘The Most Beautiful Conquest of Man’ ?: Horses and Other Animal Pursuits in 19-Century France.

In the wake of a recent scandal in which horse meat was discovered in meat products labeled as beef in the United Kingdom, University Professor of Letters Kari Weil wrote an op-ed in The Boston Globe about a debate in 19th century France over the morality of eating horse meat. Hippophagy, or the eating of horse meat, was not legalized until the late 19th century in France, and only after a “public campaign to override objections very like the ones Americans have today.”

“…the fact that it took so much persuasion to convince the French to consider eating horse—in a dispute that exposed passionate beliefs about public health, animal rights, and social welfare—suggests why we are once again facing a public scandal over hippophagy. At heart, it is an unsettled cultural crisis about which animals we accept as moral to eat,” wrote Weil.

An article by Ethan Kleinberg, director of the Center for the Humanities, professor of history, professor of letters, is featured in the 50th anniversary issue of Perspectives on History, the monthly publication of the American Historical Association. The article, titled “Academic Journals in the Digital Era”  is part of a forum on “The Future of the Discipline” edited by Lynn Hunt. View the full list of contributors online.

Khachig Tölölyan, professor of letters, professor of English, was appointed by the Social Science Research Council of the U.S. to teach a special seminar jointly with a French professor appointed by the Centre National de la Recherche Scientifique. They taught the topics of “Transnationalism” and “circulation migratoire” to 12 Ph.D candidates–six French and six American–first at the Université de Poitiers, France, from June 11-15, 2012, then in Philadelphia, from Sept. 12-16, 2012.

Tölölyan also was the keynote speaker and gave a lecture titled “Claiming diasporas, reclaiming diaspora studies,” at the conference on “Transnationalism and Diaspora,” Centre for Research in International Migration and Ethnic Relations, Stockholm University, on Oct. 23.

In addition, Tölölyan will be one of two American scholars participating in a conference of diaspora scholars taking place at Oxford, U.K. on Nov. 17-19. An anonymous donor provided the lead gift to name the new College of Letters library in honor of all COL faculty—those who taught in the past, those now teaching presently, and those who will join the COL faculty in the future.

The former Squash Courts Building located at 41 Wyllys Ave. on Wesleyan’s historic College Row has opened as the renovated home for Art History, the College of Letters and the Career Center.

Notably, several College of Letters and Art History alumni have provided gifts for the project to honor faculty members from their undergraduate days.

Resnick, now chairman of global financing advisory for the investment baking firm Rothschild Inc., was a European history major at Wesleyan, who earned an M.B.A. and J.D. from the University of Chicago. It was his Introduction to Art History course with Paoletti, he says “that really opened my eyes to art from a historical and sociological perspective.”

“The exposure to art and the ways to think about art

END_OF_DOCUMENT_TOKEN_TO_BE_REPLACED

F.D. Reeve, professor of letters, emeritus, is the author of Nathaniel Purple, published by Voyage in 2012.

A feud, a fire, an affair. Cows in the pasture, men at the lunch counter, violets in an old cream bottle. This is Vermont—passionate, pastoral, pungent, which forms a rich, vivid canvas for an intimate portrayal of village life. But human nature is a bit out of joint.

Years of living on the “bony” land has led the village people to jealousies and forbidden couplings. Reeve draws us into his world through the sharp eyes of Nathaniel Purple, who, as the town’s librarian, is the link to the world of books and rational thinking. He is also an everyman, a native Vermonter, able to embrace the town’s practical justice. The novel celebrates the strength and timelessness of the natural world above the daily struggle and quotidian quarrels of everyday existence. People live out their destinies while the seasons turn.

Wesleyan contractors put the finishing touches on the remodeled squash building and faculty are moving in. The new building will re-open as the Career Center, Art History Department and College of Letters. A grand opening ceremony will be held Feb. 24. Read more about the squash renovation in this October 2011 Wesleyan Connection story. 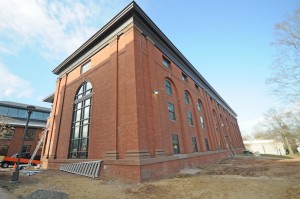 New windows on the exterior. 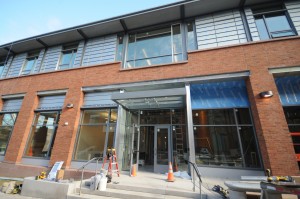 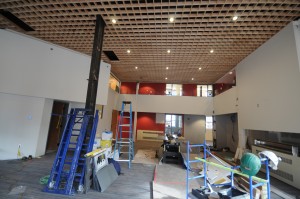 The Career Center lounge on Jan. 6. 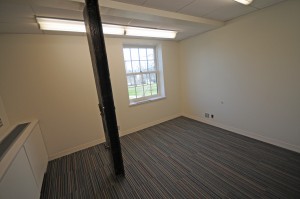 Room 203 with an exposed beam. 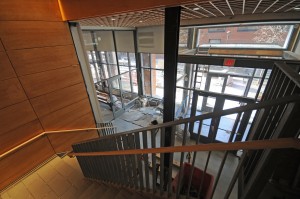 The central stairwell, leading out towards Usdan. 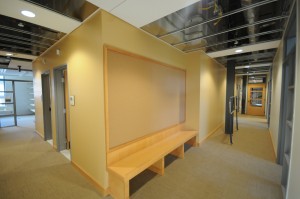 A new hallway. Restrooms on the left. Offices on the right. 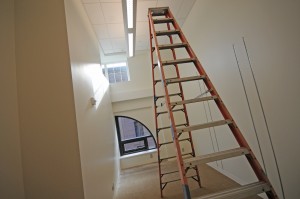 Room 302 is the future office of Professor of Art Joe Siry. It shares a window arch with Room 304 and faces North College. 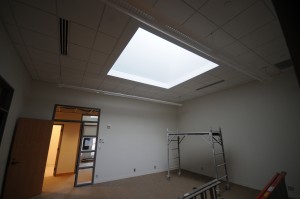 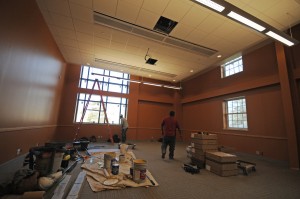 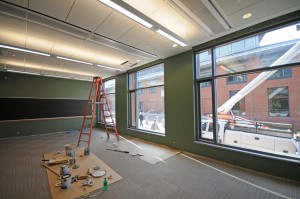 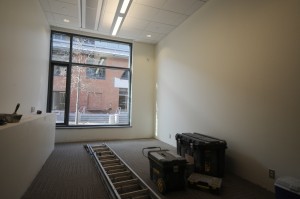