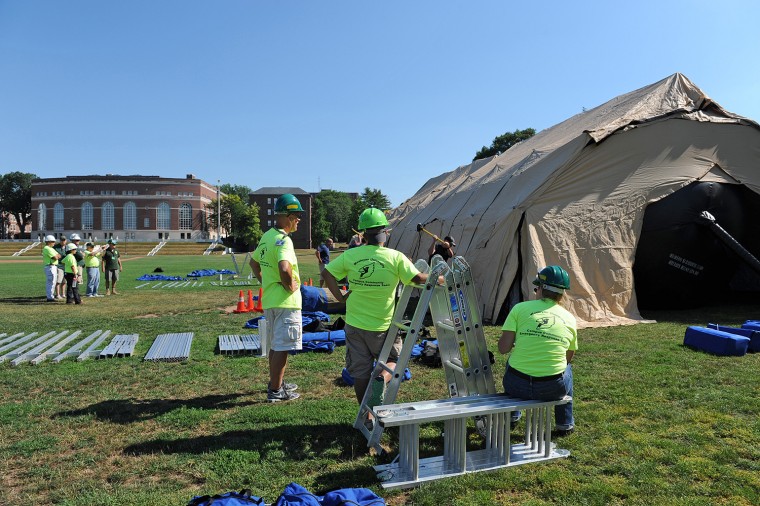 On Aug. 3, more than 20 Wesleyan employees helped erect a tent on Andrus Field that could be used as a medical facility in the event of an emergency situation.

The inflatable tent, which measures 60 by 30 feet, is 1/5 of the complete Ottilie W. Lundgren Memorial Field Hospital owned by the State of Connecticut. If all sections of the tent were assembled, it would contain a 125-bed unit, an operating room, ambulatory care and triage areas.

Members of Wesleyan’s Campus Community Emergency Response Team (C-CERT) constructed the mobile unit with guidance from Middletown’s Office of Emergency Management and Middletown Fire Department. After assemblage, the tent was inspected for any wear or problems. The medical facility was last constructed five years ago near Wesleyan’s Physical Plant-Facilities on Long Lane.

“In the event of a major disaster, we’d need to work together to set up the mobile hospital,” said C-CERT training coordinator Joyce Walter, director of the University Health Center. “This drill taught us ways to do this quickly and efficiently so we can better serve those needing medical care.”

Once the structure’s shell is assembled, staff used air to inflate the tent. Air conditioning units also were tested.

“In the community, the city and the university are often looked as being two separate entities, but when it comes to emergency response, we are all in the same boat,” said City of Middletown Emergency Manager George Dunn. “We are excited for the opportunity to work with Wesleyan and the city to construct this tent. It’s quite an amazing system.”

The tent will remain on campus for five days. C-CERT members will assist with the take-down on Aug. 8. Photos of the facility and the C-CERT team are below: (Photos by Laurie Kenney and Olivia Drake) nextO'Connell Named Society Fellow of the Geological Society of America