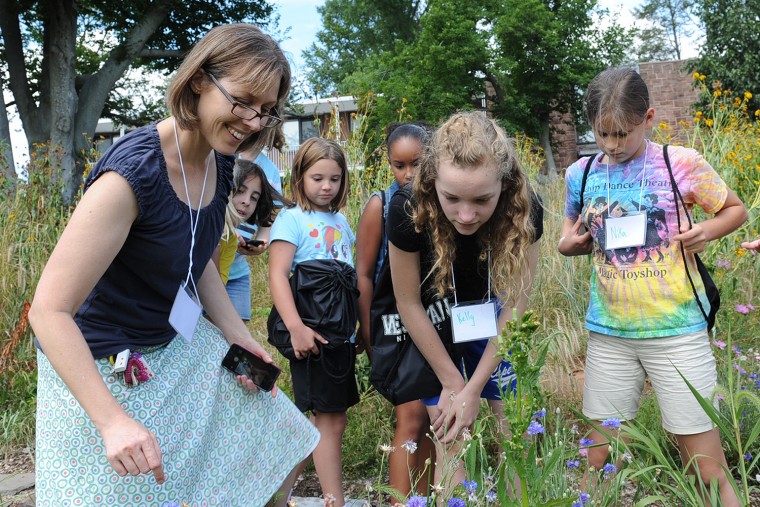 Johnson led the campers on a bug hunt through Wesleyan’s West College Courtyard garden. There, the girls observed insects while considering insect diets and insect life-cycles. The girls also learned about the life-cycle of the fruit fly and set up an experiment to test the effects of feeding flies a high-sugar diet (this negatively affects the fly life-cycle, and is akin to inducing Type II Diabetes). Johnson also taught the campers about genetic variations (mutations) that affected wing and bristle development.

“Learning about these phenotypes served as an intro to genetics, genes and proteins,” Johnson said.

Johnson also taught the girls about microscopy. After a short presentation on how a variety of biological objects appear when viewed with high magnification, the girls viewed and captured images of the fly pupal eye with a fluorescent microscope. The girls also viewed a variety of mutant adult fly eyes with dissecting microscopes and, to build their skills in observation, built 3D models of these with modeling clay. Taylor and Othon started the week with lessons on scientific inquiry, where campers learned about writing in a notebook, how to measure the mass, temperature and distance of objects, and how to use scientific measurements such as Fahrenheit vs. Celsius. Taylor talked to students about good and bad bacteria and had them culture bacteria from themselves and their environment – testing their hypotheses about where they would find the most and least. She also taught the students about DNA and had them extract it from strawberries. The campers also learned about mutating DNA and how a gene is the code for making proteins. Othon taught the campers about states of matter and phase transitions, but instead of emphasizing the traditional states of matter, they focused on fluids, hydrogels and non-newtonian fluids (oobleck). They also looked at light as a tool and investigated the interaction of light with matter. Campers learned about photons and their properties, such as wavelength.

“We used gratings to break light up into its wavelengths, and then focused light using lenses. As part of the wrap-up, Taylor and Othon led a lesson on bubbles, where the campers tested different chemical recipes to see what made the best bubbles. They also observed the colors on the bubbles and noticed a pattern in the changes in colors that happen right before the bubbles pop. The campers also sampled ice cream made with liquid nitrogen. nextTatge Joins Board of the New England Foundation for the Arts