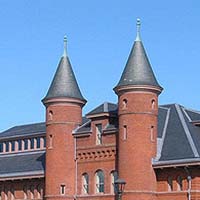 On Feb. 2, Provost and Vice President for Academic Affairs Joyce Jacobsen announced that Wesleyan has hired eight new tenure-track faculty in fields including African American studies, sociology and physics, among others. Wesleyan also made a senior hire, which will be announced later this semester after a successful tenure review, Jacobsen said. Nine other faculty searches are ongoing and will hopefully be completed this spring.

“With 18 searches going on, we will likely have a larger than usual group of new faculty coming to campus next fall,” said Jacobsen. “We’re excited to welcome this accomplished and diverse group of scholar-teachers.”

Abigail Boggs, assistant professor of sociology, is a Wesleyan alumna whose PhD thesis from University of California – Davis is titled “Prospective Students, Potential Threats: The Figure of the International Student in U.S. Higher Education.” Her work crosses the boundaries of feminist studies, popular culture, queer studies, and transnational studies. Her first book manuscript, “American Futures: International Studies and the Global U.S. University” is currently under review.

Michael Meere, assistant professor of French, holds a BA from Northwestern University and a PhD from the University of Virginia, as well as two master’s degrees from Lyon II and the Sorbonne. His book Troubling Tragedies: Violence on the French Renaissance Stage is currently under review, and he has already begun a second monograph, Performing Social Dramas in Early Modern France. He was also the sole editor of a collection of essays on French renaissance and baroque drama, and the author of many other articles. He has been a visiting faculty member at Wesleyan since 2014.

Courtney Patterson, assistant professor of sociology, earned her BA from the University of Pennsylvania and is currently completing her dissertation at Northwestern, titled “Fat Chance, Slim Chance: Identity, Culture, and a Politic of Fatness” while serving as a teaching fellow in Critical Identity Studies at Beloit College. She is interested in the intersectionality of body size, race and gender. She has had three articles published as a graduate student with several more in the works.

Renee Sher ’07, assistant professor of physics, has a PhD from Harvard and a BA in physics from Wesleyan. She specializes in condensed matter physics, in particular the study of semiconductors and organic polymers with a focus on photovoltaic materials. Her research has resulted in a number of publications in top journals in the field. She comes to Wesleyan from Stanford and the SLAC Lab.

Michael Slowik ’03, assistant professor of film, has a PhD from the University of Iowa, a MA in humanities from the University of Chicago and a BA in film from Wesleyan. His 2014 book After the Silents: Hollywood Film Music in the Early Sound Era: 1926-1934, based on his dissertation, has been shortlisted for the Kraza-Krausz Foundation Moving Image Book Award. He also has published articles on different topics in film, including one about how modern films have dealt with the rise of terrorism.

Royette Tavernier, assistant professor of psychology, holds a BS from Trent University and a PhD from Brock University in Ontario. She specializes in sleep research, particularly among adolescents and emerging adults. She has published several papers on this topic, and she has also studied the stress response of villagers to Tropical Storm Erika in her native Dominica.

Takeshi Watanabe, assistant professor of East Asian studies, holds a BA and a PhD from Yale, where his dissertation won the Marston Anderson Prize. He has written several articles about the role of food and representations of it in Japanese art, religion and culture, particularly during the late Heian period. He returns to Wesleyan after teaching here from 2012 to 2014 as a visitor.

previousWesleyan Receives Record Number of Applications for Class of 2020