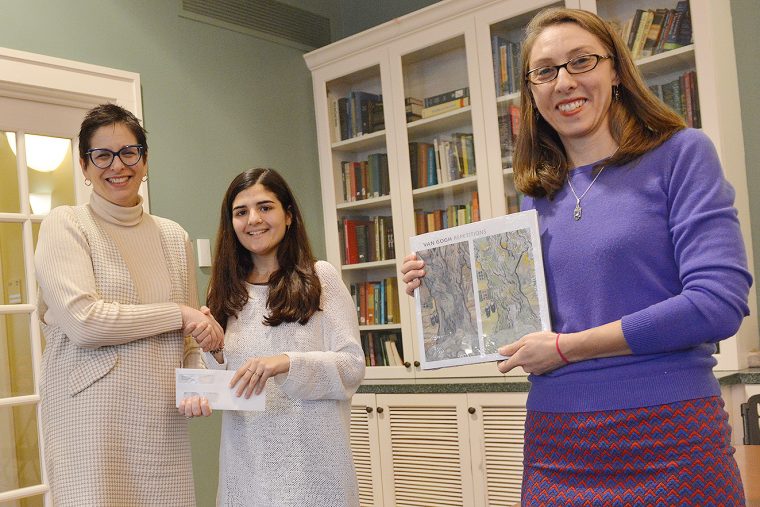 On March 28, Savoy’s essay took top prize at the Endeavor Foundation First-Year Seminar Essay Contest. She and four other first-year students received cash awards ranging from $250 to $75 and a book, selected by their course instructor. With support from The Endeavor Foundation of New York, Wesleyan was able to offer the offer inaugural awards ceremony and celebrate the success of 43 FYS in the fall, and 10 this spring.

First-Year Seminars are writing intensive courses that introduce students to a variety of topics ranging from Greek mythology to neuroscience. Faculty teaching these classes highlight the type of writing associated with their respective disciplines, and help students develop, compose, organize and revise their writing.

“All first-year students at Wesleyan are strong students, but even still, they arrive with a range of writing abilities,” said Meg Furniss Weisberg, visiting assistant professor of French, interim director of academic writing.

During the FYS program, faculty teach students the specifics of college-level academic writing: formulating an original, debatable claim; supporting that claim with textual and scholarly evidence; making analytical rather than simply observational arguments; and synthesizing one’s points into an effective conclusion. Faculty also expose students to scholarly and critical articles, as well as teach them about this new kind of reading, thinking and writing.

In addition, the structure of the courses, which favor multiple drafts and peer workshops as well as feedback from the instructor, fosters an environment of individual and collective progress, rather than of pure skill acquisition.

“The first year of a student’s time at Wesleyan should be a time of exploration, of expanding intellectual boundaries, and taking some intellectual risks,” Weisberg said.

Savoy, who was enrolled in the Arts and Art History course Van Gogh and the Myth of Genius, taught by Katherine Kuenzli, associate professor of art history, associate professor of German studies, focused her essay on van Gogh’s tumultuous relationship with religion, specifically the church, which is illustrated through his increasing incorporation of nature in his work throughout his nearly decade-long artistic career. “Although van Gogh had to find a new source to satisfy his unwavering desire for religious meaning in his life, his resentment towards the traditional church did not translate to abandoning the subject in his artwork,” Savoy said.

Her paper examines several of van Gogh’s works that feature a church motif and uses the painting The Church at Auvers, completed in the last few months of his life in 1890, to analyze his nearly two-decade long religious transformation. “The evolution of the church motif in his work supports the argument that nature provided van Gogh a sense of meaning and purpose the church never could,” Savoy said. “This reality is reflected in his complete substitution of Christianity for nature in his work in the last few years of his life.”

Daniel Atik ’20 took second place in a tie with his essay “Converted Bells: An Exploration of Religious Power Dynamics,” written in his College of Letters 120 course, Muslims, Jews, and Christians, Getting Along in the Medieval World. The class was taught by Melissa Katz, visiting assistant professor of Romance languages and literatures.

Benjamin Glass ’20 took honorable mention with his essay, “The Art of Stability. An Anatomical Explanation of a Mechanical Clock,” written in his Physics 162 course, It’s About Time. The class was taught by Lutz Hüwel, professor of physics.

During the ceremony, Ellen Nerenberg, dean of the Arts and Humanities and the Hollis Professor of Romance Languages and Literatures, presented the the students with their awards, and Meg Furniss Weisberg presented the students with a a book chosen by their course instructor. Contest judges included Nerenberg, Weisberg and Wesleyan faculty Andrew Curran, Marc Eisner and Joyce Jacobsen.

Photos of the awards ceremony are below: