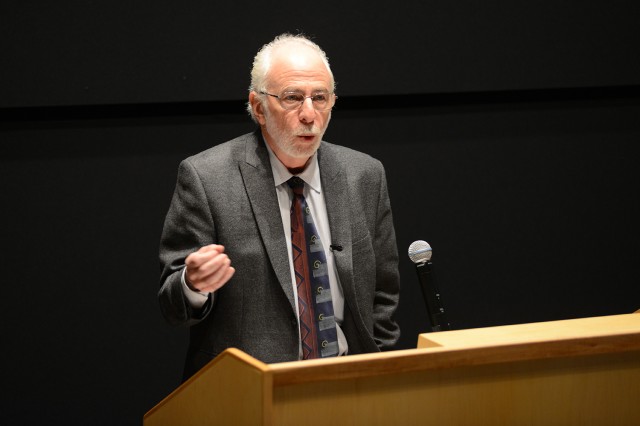 In light of President Trump’s tweeted ban on transgender Americans serving in the military, Richard Slotkin, the Olin Professor of English and American Studies, Emeritus, writes in The Conversation about the long history of integrating minorities into the U.S. military.

The armed forces have long “played a vital role in shaping American social policy toward the country’s minorities,” Slotkin writes. He recalls how “fear and resentment” of African-Americans and immigrants from Asia and Europe “generated a political backlash,” resulting in oppressive Jim Crow laws and an anti-immigrant movement in the late 19th and early 20th centuries.

Then, “The crisis produced by American entry into World War I brought these movements up short. Suddenly the nation had to raise an army of millions from scratch, with the utmost speed. There was no way to achieve that goal without enlisting large numbers of African-Americans and immigrants or “hyphenated Americans,” a derogatory term for immigrants first used at the turn of the century. It was in this crisis that American leaders rediscovered the ideals of civil equality that late 19th-century ethno-nationalism had called into question.”

Slotkin follows the country’s progress in the post-World War I era, through World War II and to the present day. He concludes:

Each act of inclusion has raised concerns about the effect on unit cohesion and military effectiveness. In 1948, for example, Army Secretary Kenneth Royall declared Truman’s order would lower the morale of the many white Southerners in the service, and that the Army should not be “an instrument for social evolution.”

Similar objections were raised to the integration of women, gays and lesbians into the military. Nevertheless, in these cases military leaders achieved integration without loss – and indeed, generally with an enhancement of military effectiveness.

In the mass armies of the two World Wars, inclusion was mandated by the sheer size of the force. Now that we have an all-volunteer military, the requirement of inclusiveness is, if anything, greater, because force size and the mix of specialists cannot be augmented by mass conscription.

Slotkin’s article also appeared in the Connecticut Post, the San Francisco Chronicle and other news outlets.