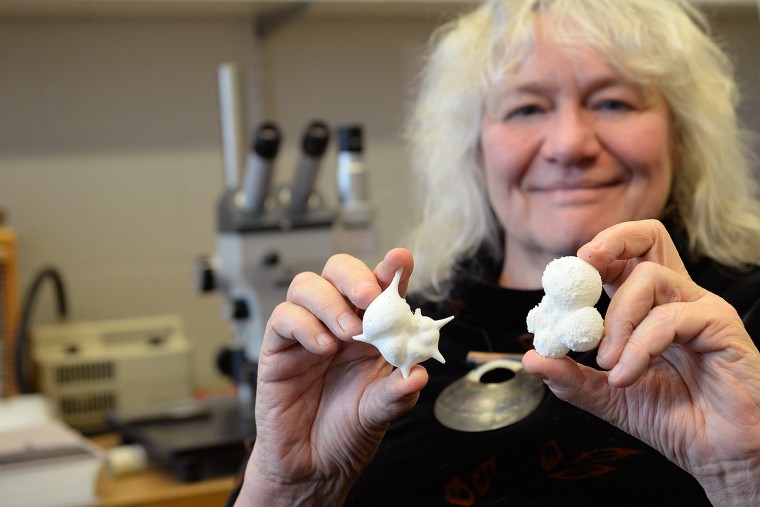 The availability of sufficient dissolved oxygen in seawater is critical for marine life, and places where oxygen falls below a critical concentration — or “dead zones” — are often associated with mass die-offs of fish, shrimp and other creatures.

With future global warming, the oceans are on course to see progressively less dissolved oxygen available. Scientists currently use often not well-tested computer models to predict the expansion of dead zones, but a team of researchers from Wesleyan, University California Riverside and Syracuse University are hoping to use oceanic sediment samples to better predict where die-offs may occur next.

Their study, titled “Refining Foraminifera I/Ca as a Paleoceanographic Proxy for the Glacial Atlantic Ocean” was funded by a National Science Foundation grant on Aug. 16. The award, worth $423,739, will be awarded to the three universities over three years.

Ellen Thomas, University Professor in the College of Integrative Sciences, research professor in earth and environmental sciences, will use her share of the funds to support undergraduate student summer research fellowships.

The researchers will develop novel, geochemical approaches — or proxies — to enable them to reconstruct changes in ocean oxygenation. One such proxy is the concentration of iodine in the form of iodate in sea water. Iodine is common in seawater, and if there is sufficient oxygen the iodine will be in the form of iodate, which can be built in the shells of microscopic fossils called foraminifera. If there is little oxygen, iodine is in the form of Iodide, which is not built into shells. Higher oxygen levels in seawater thus result in higher iodine concentrations in calciumcarbonate shells, thus a higher ratio of Iodine to Calcium, I/Ca.

The team will calibrate the proxy on sediments forming on the sea floor now, then use core samples to document oxygenation changes since the last ice age at different depths and in different parts of the Atlantic Ocean.

“I/Ca in foraminiferal shells has shown great potential to reveal subtle changes, at local to regional scales, that may help us to see differences in oxygen levels which are relevant to future threats to marine ecosystems on a human time scale,” Thomas said.

A representation of what happens to iodine as it cycles through the ocean, and how changes in I/Ca in foraminifera reflects changes in ocean oxygenation will be included in a complex (Earth System) model of the climate system and ocean carbon cycle.

“Combining advanced models with new data will help in refining our understanding of the iodine calcium proxy, to investigate baseline oxygenation levels for future changes in our geological time, and facilitate more advanced model calibrations and projections of ocean oxygenation.”

The Wesleyan fellows will assist with the research, which involves sample processing, learning to recognize and make images of the unicellular shells, and interact with students at the other participating universities.