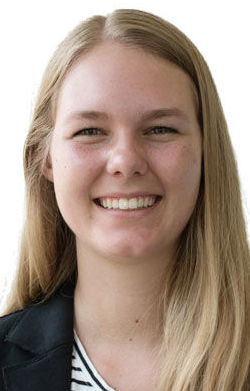 “At Spring Lobby Weekend we were lobbying on immigration, specifically asking our representatives to enact a pathway to citizenship for Dreamers (young undocumented immigrants who were brought to the United States as children), without hurting border communities or immigrant families,” Sundberg explained. “The Connecticut delegation met with staffers in the offices of Senator Murphy, Senator Blumenthal, and Congresswoman DeLauro. We also participated in various workshops, heard from speakers working in D.C. on immigration issues, and connected with other young adults from across the country over the course of the weekend.”

“I decided to apply to Advocacy Corps after having a great experience at Spring Lobby Weekend last year,” she said.

At Wesleyan, Sundberg is involved with Veg Out, an environmental justice student group that works to raise awareness about the adverse effect of the animal agriculture industry. She also participates in the Real Food Challenge, which works with Bon Appétit to switch dining hall purchases to more sustainable, fair, local, and humane options.