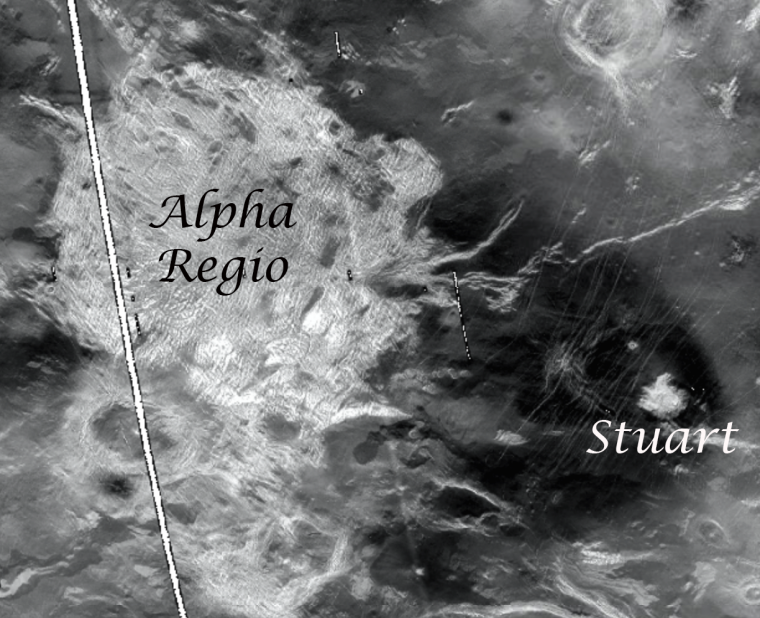 Like planet Earth, the geology of Venus is diverse; consisting of areas of flat plains and deformed, mountain-like terrains called tesserae. And like Earth, Mars, and the Moon, Venus is checkered with hundreds of craters.

“What’s odd about Venus’s craters, is that craters we do see are relatively young, indicating the surface of Venus has been covered by planet-wide volcanic flows,” says Martha “Marty” Gilmore, George I. Seney Professor of Geology, professor of earth and environmental sciences. “The tesserae are the only terrains older than these volcanic flows and thus our only hope at accessing rocks from the first billion years of Venus’s history, when the planet may have had an ocean and may have been habitable.”

As the recipient of a three-year $430,801 grant from NASA’s Solar System Workings Program, Gilmore and James Greenwood, assistant professor of earth and environmental sciences, will use Magellan radar data to create the first map of crater ejecta on Venus classified by origin on plains or tessera terrain. Their project is titled “Radar Emissivity and Dielectric Permittivity of the Venus Surface Beneath Crater Parabolas.” Crater parabolas refer to the shape of the ejecta deposits as they are carried westward by the high-altitude Venus winds.

The radar data can be used to determine whether the materials from presumably ancient tesserae differ from those of plains. While the tesserae are an unknown material, the plains are inferred to be basalt, an igneous rock formed from the rapid cooling of lava derived from the mantle.

Through this study, Gilmore and Greenwood will examine the differences in radar properties between parabolas derived from tesserae versus those derived from the plains to see if they are consistent with different rock types, particularly rocks, like granite, that require water for formation. They’ll measure the variability in radar properties of parabolas at different altitudes, where differences in the surface temperature affect the weathering of rocks by the hot atmosphere, changing the mineralogy of the rocks. They will also evaluate potential minerals responsible for radar signatures of the Venus highlands, by placing them in the massive Venus chamber at NASA Glenn Research Center, which can simulate the Venus environment.

They expect that this work will shed light on whether tesserae and plains differ, if that difference can be attributed to mineralogy, and if so, are those mineralogies consistent with higher silica compositions for tessera terrain. The latter may indicate the tessera formed during an era on Venus with abundant water and plate recycling.

Earth and Venus are the same size but have had very different histories. Four billion years ago, both Earth and Venus had an ocean, but Venus has lost its ocean over time becoming the hot and cloudy world we see today. Understanding Venus is key to understanding the evolution and habitability of Earth-sized planets in our solar system and those we are rapidly discovering in other solar systems.