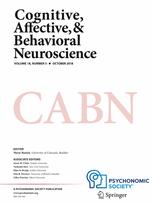 Assistant Professor of Psychology Mike Robinson, Samantha Hellberg ’16, and Trinity Russell ’17 are coauthors of a study published in the Journal of Cognitive, Affective, & Behavioral Neuroscience, October 2018.

In the paper titled “Cued for risk: Evidence for an incentive sensitization framework to explain the interplay between stress and anxiety, substance abuse, and reward uncertainty in disordered gambling behavior,” the coauthors propose a theoretical framework about how cross-sensitization of reward systems in the brain, in part due to uncertainty, leads to high levels of comorbidity between gambling, substance use, and anxiety disorder.

In particular, the coauthors review the literature on how cue attraction and reward uncertainty may underlie gambling pathology, and examine how this framework may advance our understanding of comorbidity with anxiety disorders, and substance use disorders, such as alcohol and nicotine, which are both frequently consumed in gambling settings.

“We argue that reward uncertainty, as seen in slot machines and games of chance, increases the activity of the neurotransmitter dopamine in reward pathways in the brain, and does so in ways that are similar to drugs of abuse,” Robinson explained. “This increased activity results in brain changes that sensitize reward pathways and render them hyperreactive to the cues consisting of lights and sounds that are prevalent in the gambling context. In turn, these cues become capable of triggering sudden urges to gamble and can increase the risk of relapse.”

More importantly, however, sensitization of reward pathways in the brain produce hyperreactivity to other forms of reward such as alcohol and nicotine, through a mechanism known as cross-sensitization. This cross-sensitization increases the risk that one might abuse addictive drugs, which in turn can precipitate or worsen the development of a gambling disorder. This bidirectional relationship between gambling and drug abuse is further marred by stress and anxiety.

“Most notably, stress has been shown to be one of the most potent causes of craving and relapse,” Robinson said. “Here we highlight how through this mechanism of cross-sensitization, gambling, drugs, and stress reciprocally interact to recruit and amplify gambling disorder. This helps explain why rates of alcohol use disorder and nicotine dependence have been reported as three to five times higher among individuals with a gambling disorder than in the general population, and why individuals with some form of gambling pathology are approximately three times more likely to suffer from an anxiety disorder.”

The coauthors explain that these interactions and high levels of comorbidity need to be considered in context—and from the standpoint of an underlying cross-sensitization pathology—when developing treatment strategies for individuals suffering from a combination of these disorders.