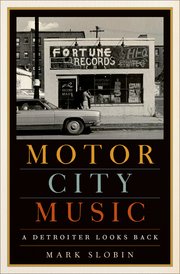 Mark Slobin, the Winslow-Kaplan Professor of Music, Emeritus, is the author of Motor City Music: A Detroiter Looks Back, published by Oxford University Press (November 2018).

Slobin’s book is the first-ever historical study of music across all genres in any American metropolis.

Detroit in the 1940s–60s was not just “the capital of the 20th century” for industry and the war effort, but also for the quantity and extremely high quality of its musicians, from jazz to classical to ethnic.

Slobin, a Detroiter from 1943, begins with a reflection of his early life with his family and others, then weaves through the music traffic of all the sectors of a dynamic and volatile city. Looking first at the crucial role of the public schools in fostering talent, Motor City Music surveys the neighborhoods of older European immigrants and of the later huge waves of black and white southerners who migrated to Detroit to serve the auto and defense industries. Jazz stars, polka band leaders, Jewish violinists, and figures like Lily Tomlin emerge in the spotlight. Shaping institutions, from the Ford Motor Company and the United Auto Workers through radio stations and Motown, all deployed music to bring together a city rent by relentless segregation, policing, and spasms of violence. The voices of Detroit’s poets, writers, and artists round out the chorus.

Slobin grew up with classical and folk music backgrounds. His early work on folk music of Afghanistan shifted to studies of Eastern European Jewish music in Europe and America, film music, and theory of ethnomusicology.