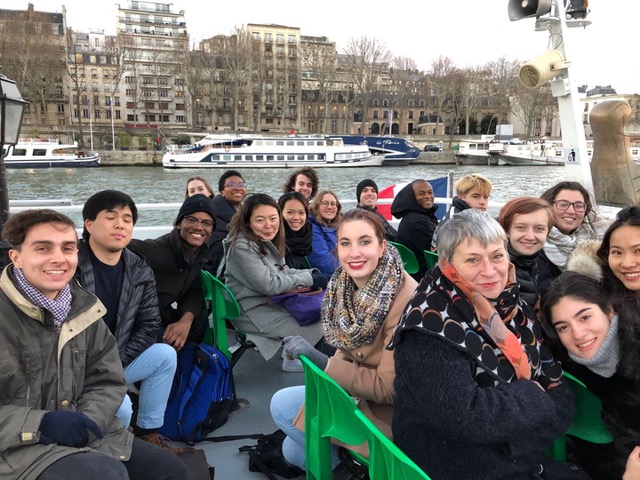 The percentage of students choosing language majors (defined as any major that requires language, which includes the College of Letters and art history) has remained fairly steady over the past two decades. Remarkable gains have been seen in the Romance languages in particular, thanks to key changes made in the curriculum and outreach efforts. For example, the number of students whose major focuses on Spanish has tripled over the past 20 years, in stark contrast to the marked decline nationally in Spanish majors. Meanwhile, at Wesleyan, Italian majors have doubled during this same time period, while the number of students taking upper-level seminars and studying abroad through Wesleyan’s Romance language programs (in Bologna, Madrid, and Paris) have also increased. Similarly, after changes initiated in 1992, French more than doubled its number of majors by 2007 and has maintained an exceptionally high number since.

“It’s very exciting to see these robust enrollments,” said Interim Provost and Senior Vice President for Academic Affairs Rob Rosenthal. “Learning a language is a window into another culture, a widening of our understanding, which is at the heart of our approach to liberal education at Wesleyan.”

The Fries Center for Global Studies’ 2018–19 Annual Report notes an interesting trend: The percent of language majors who double-major in a STEM field (relating to math and natural sciences) has increased dramatically, from about 5% in 2002 to 28% in 2019.

Associate Professor of Spanish Michael Armstrong Roche has a theory on this trend. In 2016, he became concerned that “we were not sufficiently explaining why deep study of another language and culture provided rewards (professionally and intellectually) beyond the narrowly instrumental ones of being able to work in another language.” He wrote a list of the top seven reasons “why foreign-language study is a good idea for every student” based on decades of observation, reading, and teaching. The list was incorporated into first- and sophomore-year advising materials and posted on the Registrar’s website, and an expanded version was adopted and posted on the Fries Center’s website.

The list provides concise yet compelling evidence as to how foreign language study can enrich the academic career of any student, regardless of their primary intellectual or professional interests. And, as Armstrong Roche explains, it taps into an institutional counter-trend, seen at diverse professional schools and even in corporate hiring, that recognizes that intense study of another language, literature, and culture makes for far more intellectually nimble, professionally adaptable, and communicative persons—whether doctors, researchers, administrators, or bankers. That is, the benefits of learning another language extend far beyond being able to communicate in that language.

Armstrong Roche shared a few illustrative examples of this, including the story of a 2015 graduate who double-majored in economics and Hispanic literatures & cultures. When, during his senior year, he was offered a job as a financial analyst at Deutsche Bank, he was told that they decided to hire him for his Hispanic literatures & cultures major, rather than his economics major. The hiring managers said they could teach him what he would need to know about economics in six weeks, but his deep commitment to studying another language, literature, and culture convinced them that he would be capable of putting himself in others’ shoes and communicating more effectively in English.

There was also the 2017 graduate who double-majored in molecular biology & biochemistry and Hispanic literatures & cultures, and studied abroad in Wesleyan’s Madrid program. Armstrong Roche said this student described the underlying connections between her two academic areas of focus: She thinks of science as a language and language as a science. After graduating, she received a Fulbright Fellowship to spend a year working on a molecular genetics project at the Centro Nacional de Investigaciones Oncológicas (the Spanish National Center for Cancer Research) in Madrid.

Once students are “in the door” with Wesleyan’s language programs, they are hooked with a distinctive instructional approach. Nearly all of Wesleyan’s language programs teach language, culture and—in many cases—literature together, from day one through the upper-level seminars. Armstrong Roche believes this integrated approach attracts students because it challenges them intellectually while satisfying their pragmatic desire to master another language.

“At Wesleyan we have figured out how to make our commitment to the liberal arts work: Students love to grapple with complex texts and cultural problems while continuing to work on language proficiency throughout college,” he explained. Many other schools have divorced advanced language proficiency from the humanities, creating separate tracks in foreign languages for the professions or resorting to courses on other countries’ pop culture in English to boost enrollments. In Wesleyan’s Department of Romance Languages & Literatures, all seminars are normally taught in French, Italian, and Spanish, rather than English.

Wesleyan has also implemented other strategies to further develop language study. One important new initiative is Cultures and Languages Across the Curriculum (CLAC), which is overseen and supported by the Fries Center. First offered at Wesleyan in spring 2019, CLAC is built on the idea that students benefit from opportunities to apply their language knowledge in a variety of curricular contexts across multiple disciplines. The most common model is that English-language courses in any subject area may be accompanied by CLAC courses—typically 0.5-credit, pass-fail—in which students can read about and discuss the subject matter in another language. For example, Steve Angle, professor of philosophy, Mansfield Professor of East Asian Studies, and director of the Fries Center for Global Studies, teaches a course on Chinese philosophy, along with an accompanying CLAC course in which students read in Chinese about philosophers and also discuss what they’ve learned in the language.

“CLAC courses bring together international students who are native speakers of the language with native English speakers who are learning the language. For all, they enrich study of the subject matter,” said Angle, who noted that 10 CLAC courses are being offered during the 2019–20 academic year in disciplines including philosophy, history, literature and film, and languages, including Chinese, German, Russian, Hebrew, Ancient Greek, Latin, and Spanish.

While the Fries Center’s annual report describes a number of encouraging trends in the study of languages at Wesleyan, it notes, “of course, we cannot rest on our laurels,” and that the center’s staff—together with faculty colleagues in all languages—will continue to explore all manner of trends and challenges in “continuing to make Wesleyan a national leader in language education.”