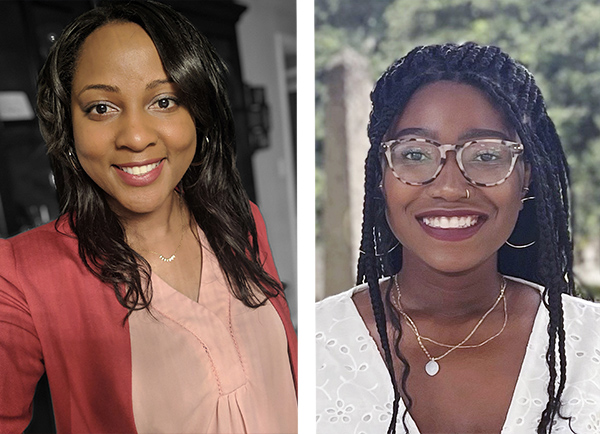 So long are the days of slipping out the back door of a party to avoid confrontation with a date gone bad. Through social media, one can easily “ghost”— that is, cut off all communication without giving a reason.

In a new qualitative study titled “Disappearing in the Age of Hypervisibility: Definition, Context, and Perceived Psychological Consequences of Social Media Ghosting,” lead researcher Royette Dubar, assistant professor of psychology, and her former master’s student Jhanelle Oneika Thomas ’18, MA ’19 investigated both the motives and psychological consequences of the act of ghosting.

The study, which appears in the June 2021 issue of the American Psychological Association’s journal Psychology of Popular Media, is based on a sample of 76 college students who participated in a focus group session.

Ghosting has an overwhelmingly negative effect on the person being ghosted and can have both short-term and long-term consequences. In the short-term, ghosting may lead to internalized feelings of self-criticism and self-doubt, Dubar explained. Over time, these feelings may hinder the development of trust and vulnerability in future relationships, “which are key ingredients for developing intimacy.”

“Because ghosting does not provide any closure to the ghostee, it robs the individual of an opportunity to address any personal issues that may actually promote growth within that individual,” she said.

A 19-year-old female participant in the study described her own experience of being ghosted: “It becomes a lot of self-doubt at first. I think a lot of personal insecurity comes out when you get ghosted because you begin to question because you don’t have answers. So you question yourself, you question what you know about yourself and you blame yourself. You say that it’s because ‘I’m not pretty enough,” or ‘I’m not smart enough,’ or ‘I said the wrong thing,’ or ‘I did the wrong thing,’ or whatever. And at least for me, that’s really harmful and can really affect my mood for a long period of time.”

Although the person committing the ghosting may not immediately feel negative consequences, the act could prevent that individual from developing important interpersonal skills. “Ghosting may prevent someone from engaging in healthy conflict resolution. Thus, over time, serial ghosters may be ‘stunted’ in their ability to develop intimacy in future relationships,” Dubar said.

Through the study, Dubar and Thomas also revealed the top two reasons why individuals ghost: disinterest (which is often within the context of casual dating relationships or hook-ups) and to avoid conflict or emotional intimacy. “Some ghosters even felt that ghosting was a more amicable and selfless way of terminating a relationship, relative to openly rejecting someone,” Dubar said.

A 21-year-old female in the study described her own reason for ghosting: “It’s easier to hide behind the screen and not face the music,” she said. Other students suggested, “sometimes the conversation just gets boring,” or “it can be really tiring to have conversations related to a lot of emotional labor and relationships,” or “not responding at all is easier and makes you less liable.” Another study participant described ghosting as “a little bit politer way to reject someone than to directly say that, ‘I do not want to chat with you.'”

Dubar also attempted to understand the persona of a “typical” ghoster. But to her surprise, no one fit a specific profile.

“It appears that the decision to ghost was mainly due to the specific circumstances of the relationship, rather than a specific personality characteristic. Interestingly, several participants reported having the experience of being both a perpetrator and a victim of ghosting,” she said.

While this particular study showcases ghosting experiences from an array of social networks—Facebook, Instagram, Snapchat, Twitter, and others—Dubar is considering another follow-up study that would specifically document experiences within the context of romantic relationships via dating apps.

At Wesleyan, Dubar leads the Sleep & Psychosocial Adjustment Lab and studies the links between sleep and a range of indices, including emotional well-being, academic performance, quality of interpersonal relationships, and technology use, in adolescents and emerging adults.

Dubar Studies Effects of Technology Use, In-Person Interactions on Sleep