Janice Naegele, professor of biology, professor of neuroscience and behavior, and her lab manager, Stephanie Tagliatela, review the brain activity of four mice that are currently being treated for epilepsy using therapies developed and tested in the lab. (Photos by Olivia Drake)

For the roughly one-third of temporal lobe epilepsy patients for whom drugs are not an option, researchers at Wesleyan are paving the way for alternative therapies using stem cells. Faculty members Janice Naegele, Gloster Aaron and Laura Grabel, together with Xu Maisano, Ph.D. ’11, Elizabeth Litvina, B.A. ’10/M.A. ’11, and Stephanie Tagliatela, the lab manager in the Naegele lab, recently published a landmark study in the Journal of Neuroscience on the use of embryonic stem cells to treat temporal lobe epilepsy (TLE). The researchers derived neural “parent cells” in culture from mouse embryonic stem cells, and transplanted them into the brains of epileptic mice. There, the transplanted cells differentiated into mature inhibitory neurons and successfully integrated and formed connections in the host brain over the course of several months.

The paper, published Jan. 4, is available to read online.

“In these experiments, we are attempting to repair an important region called the dentate gyrus, located deep inside the temporal lobe in the hippocampus. The structures affected in temporal lobe epilepsy are important for forming memories and controlling the spread of seizures throughout the brain. When inhibitory neurons in the hippocampus are injured or die off, seizures are able to spread into other brain regions, causing more severe seizures,” explains Naegele, professor of biology, professor of neuroscience and behavior.

END_OF_DOCUMENT_TOKEN_TO_BE_REPLACED

An article written by three Wesleyan faculty and two alumni was published in the January 2012 issue of the Journal of Neuroscience, 32(1): pages 46-61.

In this large, multi-year study, the authors show that embryonic stem cell derived neurons can develop into the major type in inhibitory neuron that degenerates in severe temporal lobe epilepsy. Because these interneurons reside in a part of the hippocampus that controls the spread of seizures throughout the cortex, when these neurons are injured or die off, seizures are able to spread throughout the hippocampus and into other brain regions, causing a more severe seizure.

“We believe that these findings are of high importance for developing stem cell based treatments for brain repair and regeneration,” Naegele explains. 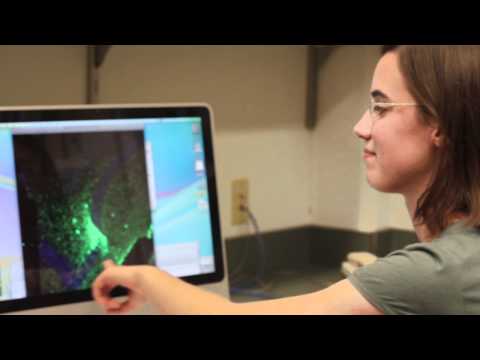 This summer, Mary Vallo '13 developed a needs assessment for the Epilepsy Foundation of Connecticut. She also volunteers in the Wesleyan Science Outreach club and plays intramural soccer. (Photo by Bill Tyner '13)

Q: Mary, what is your class year, and what are you majoring in?

A: I’m a junior, and I’m double-majoring in neuroscience and behavior and English.

Q: You’re currently working in the lab of Jan Naegele, professor of neuroscience and behavior, professor of biology. Can you tell us a bit about your research in the Naegele Lab?

A: The Naegele Lab studies temporal lobe epilepsy (TLE), which involves instances of elevated electrical activity in the brain called seizures. In cases where medication does not alleviate seizures, TLE patients experience cell death and damage in the dentate gyrus, part of the hippocampal region of the brain. Using a mouse model of TLE, our goal is to replenish the damaged neurons via stem cell injections. And since seizure-related cell death especially affects a type of interneuron that normally inhibits electrical impulses, we hope that restoring those interneurons will help to suppress seizure activity.

Q: This summer, you participated in the Wesleyan University Hughes Program, funded by the Howard Hughes Medical Institute. What was your summer-long research project?

A: The project that I began over the summer analyzes brain sections from epileptic mice that have received stem cell transplants. I stain for a protein that marks transplanted cell axons and another protein called gephyrin that is found at inhibitory synapses. So far, I have found several instances where transplant axons overlap with gephyrin. These findings suggest that the stem cells form inhibitory connections that may contribute to seizure suppression.

END_OF_DOCUMENT_TOKEN_TO_BE_REPLACED

Professor Laura Grabel has received a $750,000 grant from The State of Connecticut Stem Cell Research Advisory Committee for her study titled “Angiogenesis of Embryonic Stem Cell Derived Hippocampus Transplants.” It is her third grant from the Committee since Connecticut began its state-funded human stem cell research program in 2006, and second where she is the principal investigator (P.I); she was co-P.I. on the other.

END_OF_DOCUMENT_TOKEN_TO_BE_REPLACED Mandela Kazi ’12 speaks about "The Human Connectome Project." Plastic model brains are arrayed on the table in front of him.(Photo by David Pesci)

“Let’s pass around the brains, but please be careful,” Jennifer Cheng ’11 says. “They break easily.”

Maryann Platt ’11 and Mandela Kazi ’12 hand out the brains, detailed plastic models with interlocking, removable pieces that allow anyone picking them up to study the organ’s specific areas.

“I don’t think you need to use the stands,” says Janice Naegele, professor of biology, professor of neuroscience and behavior.  “I think you can just give them the brains.”

The students nod and make a note and return to their presentation, titled “The Human Connectome Project,” which focuses on the brain, connectomes and the new 3-D technology being used to better map both. The presentation is a practice session that the other students in the class, Neuroscience and Behavior (NS&B) 360, watch and then give feedback. The real thing came a few weeks later in front of high school students, an event that the NS&B 360 students have been anticipating all semester.

NS&B 360 is a new offering this year, a combination capstone course – an intense, rigorous experience that is cumulative and requires students to draw on their previous coursework – as well as a service-learning course, which combines active learning with providing a service to the local community.

END_OF_DOCUMENT_TOKEN_TO_BE_REPLACED

Jan Naegele, professor of biology, professor of neuroscience and behavior, is the author of “Tangled Roots: Digging Deeper into Astrocyte or Interneuron Dysfunction in Temporal Lobe Epilepsy,” published in Epilepsy Currents, Volume 11, Issue 1, 2011. The article is online here.

She’s also the author of “STEP Regulation of Seizure Thresholds in the Hippocampus,” published in Epilepsia by Wiley Publishers, 2011. The article is online here. At right, Wendy Suzuki, a professor at New York University, taught an Intensati aerobics class to Wesleyan students on April 21 in the Freeman Athletic Center. Suzuki studies memory and the hippocampus, and has a particular interest in how exercise improves memory function.

END_OF_DOCUMENT_TOKEN_TO_BE_REPLACED

The March 2011 cover of Epilepsia.

Faculty, alumni and students from the Biology Department and Neuroscience and Behavior Department have an article titled “STEP regulation of seizure thresholds in the hippocampus,” published in Epilepsia, Volume 52, Issue 3, March 2011. Epilepsia is the journal of the International League Against Epilepsy.

This study found that mice lacking a specific enzyme (STEP) have a significantly heightened resistance to developing epileptic seizures. The study then documents a mechanism and location in the brain where this enzyme might have its effect in regulating the seizure thresholds. Briggs and Walker were BA/MA students in the NS&B program, and they worked in the labs of Naegele and Aaron, respectively. Asik works with John Kirn, chair of the Neuroscience and Behavior Department. Janice Naegele, professor of biology, professor of neuroscience and behavior, speaks to first- and second-year students about her neural stem research during a Wesleyan Women in Science Lab Tour on March 3. Nine faculty members opened their labs for the tours, which are on-going through March 29.

END_OF_DOCUMENT_TOKEN_TO_BE_REPLACED Ann Burke, chair and professor of biology, welcomes students to the Department of Biology open house and information session Feb. 16. Several departments on campus hosted informational luncheons recently to teach students about classes and research opportunities, and to introduce them to faculty members.

END_OF_DOCUMENT_TOKEN_TO_BE_REPLACED In the article, Hingorani and Bricca wrote about their course, “Making the Science Documentary,” which they co-taught together, starting in 2007. The course was designed to introduce undergraduate students to the life sciences and to documentary filmmaking